Taking It to the Streets

The Engineering Department manages the construction, reconstruction and resurfacing of approximately 4 - 5 miles of roadway in the City of Midland each year. Crack sealing and surface treatments are also completed as maintenance operations on Midland's street system to extend the life of existing pavement surfaces. 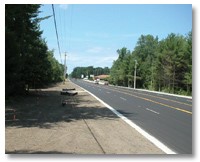 The department provides engineering services involving all design, plan and specification preparation, plus construction management and inspection of all streets installed within the City of Midland, including new subdivision streets.

While new roads are constructed under the supervision of the Engineering Department, routine maintenance of City streets is handled by the Department of Public Services (DPS). Requests for maintenance of Midand's roadways such as potholes, curb repairs, or minor cracks in the roadway may be submitted to DPS at any time during the year. Call DPS at 989-837-6900 for more information.

The Engineering Department provides services involving all design, construction management and inspection of all new sewers and water mains installed within the City of Midland.

It is important to give appropriate consideration to the vast network of underground utilities located in the City right of way. The Engineering Department gives considerable thought to the design and construction of underground utilities to keep public water and sewer lines separate from private utilities such as gas, electric, cable TV, and telephone lines. The department also works to minimize other potential conflicts that could arise with proposed new City utilities.

Over time and with continual use, the City's underground utilities (water and sewer) can deteriorate and/or require occasional extensive maintenance. The Engineering Department reviews available information to decide whether or not to perform improvements in conjunction with street reconstruction projects.

Keeping citizens notified of upcoming and ongoing construction projects within and around the City of Midland is a very important part of every construction project. Sending letters to residents whose property fronts areas slated for public improvements is often incorporated into the beginning stages of our public notification plan. Press releases are then sent to local newspapers, radio and television stations and other media outlets, and mass mailings are often sent to homeowners who may be affected by proposed street closures or traffic restrictions in City construction zones.